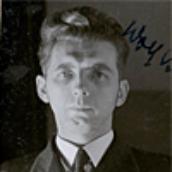 This is a collection about Wolf Klaphake, a scientist and inventor who migrated to Australia from Germany in 1935 and was interned for four years during the Second World War. The collection is introduced by Klaphake's internment camp identity card, seen here, which links to a richly documented 'Uncommon lives' showcase entitled 'A doubtful character: Wolf Klaphake'. The showcase is reached via the educational resource page for the identity card in the National Archives of Australia's Virtual Reading Room (VRROOM).