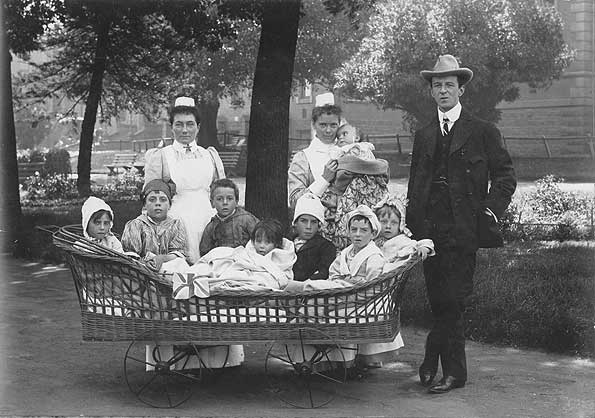 This is a black-and-white photograph taken in the grounds of the Melbourne Hospital on Christmas Day, 1900. It shows children from the hospital's diphtheria ward seated in a large wicker pushcart. Two nurses, one of whom holds an infant, stand behind the children. On the right of the photograph is a doctor. The photograph is mounted on card. The details of the photograph and the names of the subjects are inscribed in cursive script on the card. They are listed as Nurse Grant, Sister Duncan, Tommy Cundl (infant) and Dr Owen. The children in the pushcart are, from left, Matilda Bradshaw, Percy Fouracre, Edgar Turner, Francis Bowes, Arthur Bliss, Dick Bliss and Amy Walter.