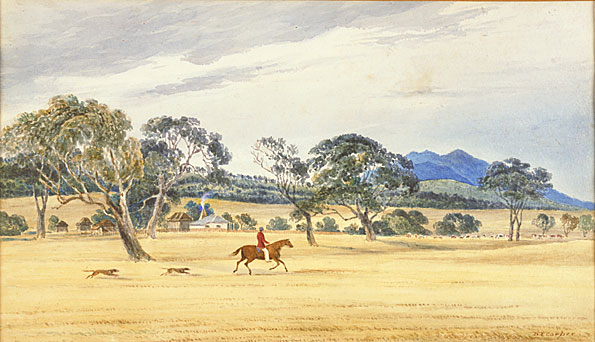 This is a watercolour by Duncan Cooper that shows the second hut built at Challicum, a sheep run west of Ballarat in western Victoria established by Cooper and George and Harry Thomson. In the foreground is a man on horseback, who may be Harry Thomson, followed by two dogs, crossing a grassy plain. Almost directly behind the rider are a number of buildings that make up the Challicum home station (the most prominent of which is the 'second' hut), bordered by a palisade (paling fence). On the right, cattle are shown grazing and in the distance behind them are the peaks of Mount Langi Ghiran. The watercolour measures 14.5 cm x 24.8 cm and Cooper inscribed the words 'No. 3 Challicum, 2d hut, 1845: summer view' on the mount.